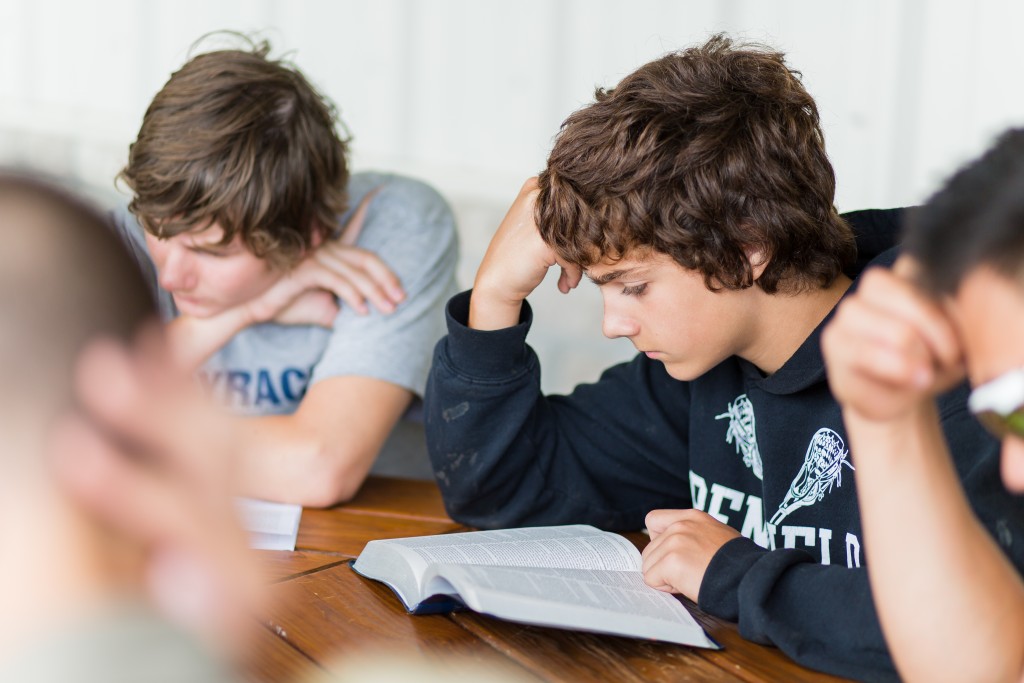 Do many of the boys in your program come from a background where they have never even learned to find their way through the Bible, much less know any Bible truths? Do they forget to bring their Bibles to meetings and show very little enthusiasm for using them? Here is a plan that may help to solve these problems. It uses competition between posts to spark interest and the format of a Bible drill for learning. While this plan was designed and implemented in Stockade, it should be usable in Battalion, as well.

If you are working with boys who know little or nothing of the layout of the Bible, then it will be necessary to start with basics: Explain the general organization of Testaments, books , chapters and verses. Show how to use guide words at the top of the pages and explain that it is similar to the system used in dictionaries. Teach them to open to the middle of their Bible to find Psalms and to the middle of the second half to find the New Testament.

Write the first five books of the Old Testament on a chalkboard and say them together. Now start your first Bible drill with one verse from each book taken in order. Follow up with five more verses from these books in mixed-up order. This should take no more than 10 minutes. Each week add about five more books and keep reviewing the old ones by mixing in verses from them in the second half of the Bible drill. Go slow. Keep the time short so that the boys do not get bored. If they ask for more verses then you are keeping it just right. Say the books together each week. Encourage rangers to do some extra drilling during post time if their boys are lagging behind. It may take most of the year to complete, but by the time you are done, the boys should know the books and be able to find them in a reasonable time. It should also encourage them to look up the Bible stories and verses in their achievement books.

Keep the time short so that the boys do not get bored. If they ask for more verses then you are keeping it just right.

Here is a suggested way for holding a Bible drill:

At the opening lineup each boy places his Bible squared up in front of him. Give one point for each Bible. At the end of the line-up, all sit in place by posts. As an alternate this could be done at the honors lineup. However, this is not recommended if it is followed by Story Circle. The boys would tend to get restless with two sitting activities back-to-back.

Lend out extra Bibles to those who forgot them. Have each boy close his Bible and hold it by the binding. As you call out a verse the boys may begin looking for it. Repeat the book, chapter and verse several times as they are looking. No one should be talking. If a boy wants the verse repeated he must raise his hand. Do not allow them to call out for it.

The first one to find it must read the first three words. If it is right, he is recognized and then reads the verse and his post receives one point. If it is the wrong verse, say “no” (gently) and wait for someone else to find it. Saying, “I found it” is not allowed. If the post is too noisy, you may have to deduct a point. To avoid a few boys dominating the drill, only allow them one verse each week.

The variety of translations you may encounter may make it difficult at times to determine if the right verse was found. When this happens, post rangers should be on the spot to check. Also be aware that some versions have some differences in chapter divisions; especially in the Psalms. It is better to live with these difficulties, however, and have each boy use his own Bible than to try to hand out common versions. Otherwise, the impact of encouraging boys to own, read and bring their Bibles will be lost.

Have a small reward for the post with the most points. Splitting up a roll of Lifesavers at the end of the meeting is a good way. You might want to include a wider contest based on other things such as attendance, bringing achievement books, bringing a guest, passing achievements and completing badges. If the posts are not equal in size, it may be necessary to adjust the points accordingly. One way is to divide the points by the number of boys in the post and then multiply by 10.

To make the most of the Bible drill, choose a common word or subject for all the verses. A concordance will make this easy. This is beneficial in two ways. First, ask the boys to guess the word or theme . This will encourage them to listen when the verse is read . It will also allow you to comment on the meaning of the verse and/or teach a Bible truth. This could be in addition to or be followed up during Story Circle.