Shaving is a big deal. It’s a big deal for dudes who have to shave daily, because it’s an annoying hassle and blades are a hugely expensive racket running a close second behind ink cartridges. But when you are a young man it’s a big deal in a totally different way. It represents a major threshold into manliness. It is easy for me standing so far past that threshold to forget how important this mark of masculinity was to me as a young man.

My own fatherlessness was not a daily part of my thinking, but I can still feel the palpable sense of embarrassment and frustration not really knowing how to even begin the process. I think I felt like the manly thing to do would be to figure it out on my own. The irony is that this is one of those rights of passage that really is supposed to be taught.

Like a family tradition, it is supposed to be treated as a special season in the life of a young man, and should be handed down carefully from one generation to another. What a huge mistake we make when we assume a cold utilitarianism in our approach to these important activities in the discipleship of our children.

One evening this past summer I had washed off the dirt from that day’s activities at our boy’s camp and had set to work to deforest my face. As usual my goal was to complete the task as quickly as possible. As I focused my attention at my image in the mirror and applied the shaving gel I noticed in my peripheral vision a boy who’d just finished brushing his teeth and who was now standing motionless staring at me.

I hadn’t had the chance to get to know Anthony yet that week but I could tell as he stood there watching, that this was not a simple moment of curiosity. “Can I watch you shave?” he asked with far less embarrassment than I would have expected. “Sure.” Over the next few minutes this 12 year old boy stood there in a state of naive fascination, consuming every motion, cataloging each action with a sense of seriousness that almost brought tears to my eyes. Honestly, I also felt quite a bit of pressure … like the president must have felt before throwing out the first pitch of baseball season. Audiences make me nervous and there was a lot riding on what had now become a performance of sorts.  I hoped my technique was good. I imagined the poor kid lying limp on a cold tiled bathroom floor bleeding out at the age of 16 because of my poor example.

The whole interaction didn’t last very long. But while we stood there … me shaving … Anthony staring … I did have a chance to ask a few questions. I asked about who lived with him at home. His bio dad wasn’t around. His step dad was distant and didn’t really interact with him all that much.

With each pass of my razor and each new insight into Anthony’s life it became clear that this ordinary moment in my life was not ordinary for him at all.

It also reminded me of the importance that dads play in the life and discipleship of their sons. Those ordinary moments are extra-ordinary opportunities. How often we simply zoom through them or respond to the unasked for “intrusion” of our own children with annoyance rather than recognizing them as chances to model masculinity at the same time engaging the hearts of our sons.

Let us respond to our children the way Jesus did and “suffer the children to come” to us, even if it means a few more minutes of shaving. 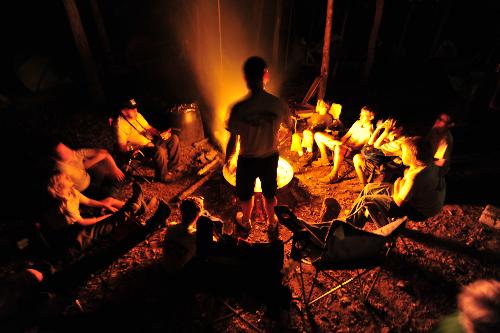